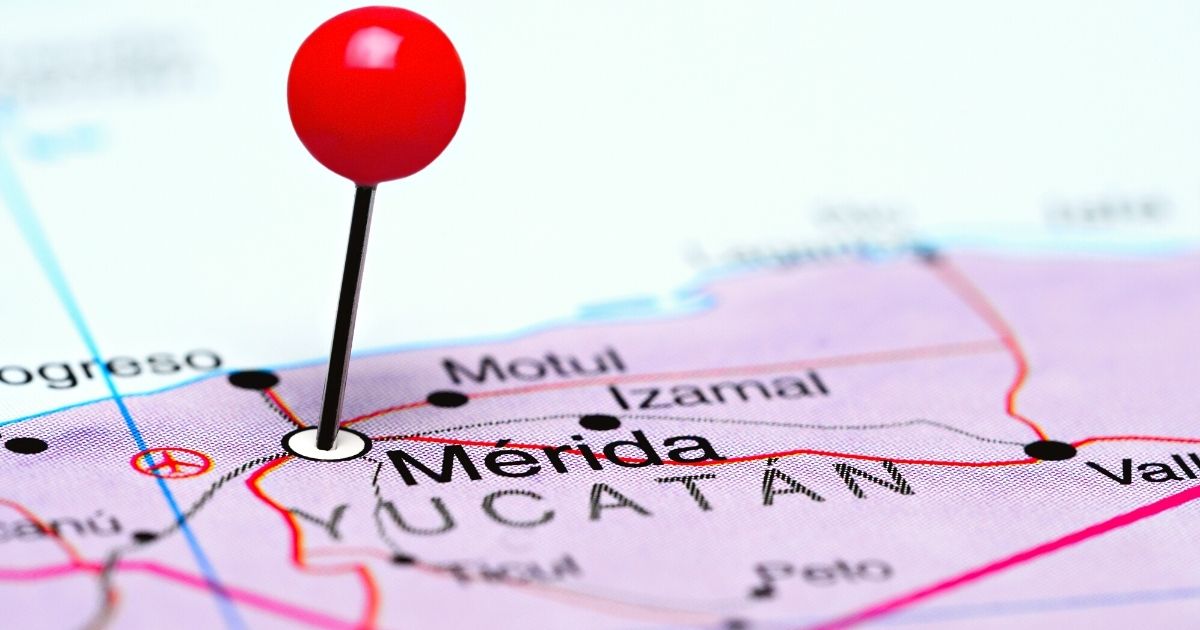 Where is Merida Mexico?

Ready to discover where Merida Mexico is located, and where all the best Merida neighborhoods are located? Let’s get to it!

Where is Merida Mexico on the Map?

Merida is in southeastern Mexico. It is not far from some of the most popular Mexico travel destinations, including Cancun, Tulum, Riviera Maya and Playa del Carmen. It is also located directly south of New Orleans, just across the Gulf of Mexico.

How far is Merida Mexico from Cancun Mexico?

If you want to get from Merida to Cancun, the driving distance is 193 miles (309 km). It takes about four hours in normal traffic.

How far is Merida from the U.S. border?

What Mexican state is Merida in?

Merida is in Yucatan State; in fact, Merida is the capital of Yucatan State. The state of Yucatan, Mexico is located in the Yucatan Peninsula, one of the best places in Mexico for vacation and travel because you’ll find everything from swimmable cenotes to ancient Mayan Ruins.

What is Mexico’s Yucatan Peninsula?

The Yucatan Peninsula in Mexico has three states: Yucatan State, Campeche State and Quintana Roo State. Like the name says, this is a peninsula with water on three sides. To the north and west, there’s the Gulf of Mexico, while the Caribbean Sea stretches the length of the east coast.

How far is Merida Mexico from the beach?

The closest beach to Merida is Puerto Progreso Beach, a cruise port city. The town of Progreso, Mexico is located about 23 miles (36 km), or 45 minutes by car, from Plaza Grande (City Center), the Paseo de Montejo and Downtown Merida, and 30 minutes from North Merida.

There are other great beaches near Merida, including Telchac, Celestun, Chuburna Puerto, Sann Crisanto and Sisal, one of the Mexico pueblos magicos, or magic towns. These are a bit further from Merida, but if you’re renting a car in Merida, everything is easily accessible.

Are there hurricanes in Merida Mexico?

Located in the Yucatan, with the Gulf of Mexico to the north and Caribbean Sea to the east, Merida is susceptible to intense thunderstorms, tropical storms, and sometimes, hurricanes. if you’re wondering, How often do hurricanes hit Merida Mexico? The answer is not very often.

An inland city about 23 miles (36 km) from the coast, Merida doesn’t often experience direct hurricane strikes. By the time hurricanes make it to Merida, they will have been over land for some time, and therefore, have usually weakened into tropical storms or just inclement weather.

The last major hurricane to hit Merida was Hurricane Isidore in September 2002. It was a Category 3 hurricane with 125 mile per hour winds (201 km/h), and it remained over the city for about three days 😳 Luckily for those of us living in Merida, this is rare.

What are the Best Neighborhoods in Merida Mexico?

The best neighborhood in Merida depends on your needs and wants. If you want to be near all the historic buildings and colonial architecture, that’s in Merida Centro (Downtown). If you want a gated community and a new construction home, that’s in North Merida.

Nearly any part of Centro Historico is a great area to be in — and it’s actually where I live! The map below highlights some of the best areas in Centro by name, including Paseo Montejo, Santiago, Santa Lucia, Garcia Gineres, Itzimna, La Mejorada and San Juan.

You’ll see where North Merida is on the map below — though obviously, it’s in the north part of the city. In Merida Norte, you’ll find large malls and all the best shopping in Merida, as well as fraccionamientos, the U.S. equivalent of a large subdivision, or gated community.

Where is Merida Airport?

What airport do you fly into for Merida Mexico?

This is a smaller airport, so it’s easy to navigate and never very busy. However, there are very few international flights into Merida, so it’s not always easy to find direct flights to Merida. If you can’t, look for a connecting flight through Mexico City, Guadalajara or Tijuana.

Since it’s larger and gets many more flights, some people fly into Cancun International Airport (code: CUN). If you prefer to fly to Cancun, you’ll have to book private transportation, rent a car, or take the ADO bus to Merida. This Cancun to Merida Travel Guide will explain all your options.

Historic Downtown Merida and the Paseo Montejo street are both walkable areas, so you can get around on foot. If you’re staying in the north part of the city, you’ll want to consider renting a car in Merida to get around, or use Uber.

Merida is on a Grid System

When people visit Merida, they often want to know the address of a place. Well, Merida addresses are quite confusing, and not always straightforward — so let’s break it all down.

🗺 FREE Merida Mexico Map: Want a map of Merida that has all the best things to see in Merida highlighted for you?! Head here to get your Merida Sites Map.

While some places in Merida have a house number or building number, some don’t (like Palacio de Gobierno). In cases like these, you’ll have to use the cross streets. If it does have a number, that makes things a lot easier, but now you know how to navigate by cross streets.

Many years ago when the city of Mérida was much smaller than it is today, the citizens named their streets, rather than numbering them. Since there were fewer points of reference, the names helped people easily find businesses in Merida.

When the city grew, the number system made more sense. Though Merida streets are numbered today, the old plaques remain up. When traveling to Merida and strolling around Centro Historico (Historic Downtown), be on the lookout for the plaques on Merida street corners.

Is Merida a part of Mexico?

Yes — Mérida is a city in Mexico. However, if you google “Merida” on its own, you may find the other Meridas in the world, like Merida, Venezuela, and Merida, Philippines, located in the Leyte Province on Samar Island. (You will even see the Disney Merida princess and Merida bike company!)

How big is Merida Mexico?

In size, the Greater Merida Municipality is 331 square miles (859 square km), which includes Mérida, Umán, and Kanasín. Merida itself is the 13th largest city in Mexico. If you’re wondering What is the population of Merida? — It’s about 1.25 million.

Yes — For the vast majority of travelers, Merida is safe. That’s not to say “bad” things don’t happen in Merida; they do. However, Merida is widely known as the safest city in Mexico. As safety is a complex topic, check out Is Merida Safe for Travelers? for more info.

Is Merida Mexico worth visiting?

Yes — Now, I’m admittedly biased on this question, but even still, Merida is one of the best places in Yucatan to visit. La Ciudad Blanca (The White City of Merida) is known as the Culture Capital of Yucatan for its rich Mayan history, only one of many reasons to take a Merida vacation!

Winter — You’ll get the best Merida weather from about late-October to late-March. Now that you know the best time to travel to Merida, the worst month to visit is May. This is the hottest month of the year, though it’s just generally pretty hot from May to September.

I hope the Merida maps in this article gave you a better understanding of the city’s layout. While all cities are difficult to navigate at first, some are worse than others, and Merida really hasn’t been to badd for me personally. The fact that Downtown Merida is a grid, certainly helps things!

🚑 Should I buy Mexico travel insurance?

100% YES! — With basic coverage averaging just $5-10 USD per day, enjoy peace of mind with a plan from Travel Insurance Master, one of the biggest names in travel insurance. (Read more)

💧Can you drink the water in Merida?

No — You’ll want to buy a Water-To-Go Bottle, which filters your drinking water so you don’t get sick from drinking water in Mexico, and helps keep you hydrated while traveling Mexico. (Read more)

Yes — Renting a car in Mexico is one of the best ways to see the country! I always rent with Discover Cars, which checks both international companies and local Mexican companies, so you get the best rates. (Read more)

📲 Will my phone work in Merida?

Maybe — It depends on your company, so check with your provider. If you don’t have free Mexico service, buy a Telcel SIM Card. As Mexico’s largest carrier, Telcel has the best coverage of any Mexico SIM Cards. (Read more)

🏩 What’s the best way to book my Merida accommodation?

For Mexico hotels and hostels, Booking is the best site. If you’re considering a Mexico Airbnb, don’t forget to also check VRBO, which is often cheaper than Airbnb! (Read more)

🎫 Do I need a visa for Mexico?

Likely Not — U.S., Canadian and most European Passport holders don’t need a visa for Mexico; but check here to see if you do need a Mexico travel visa. The majority of travelers will receive a 180-Day FMM Tourist Visa upon arrival.

Hi, I'm Shelley — a former Miami travel magazine editor who ditched the office for the world! I've been an expat in Mexico since 2018, and help travelers like you cross Mexico off your bucket list. [Read more]