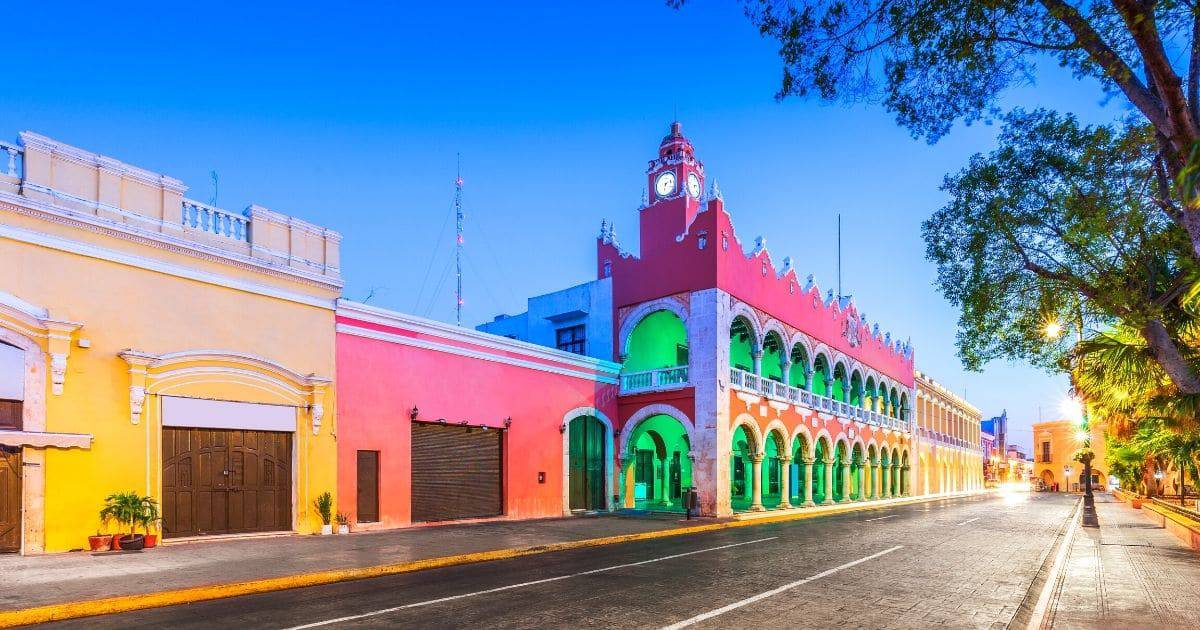 Looking for the best way to spend 1 day in Merida, Mexico?

There are so many things to do in Merida, known as the Cultural Capital of the Yucatan Peninsula, and you can see a lot within your one day in Merida.

As it’s not a huge city — and the one I happen to live in! — I’m going to show you how to really enjoy your short time in Merida.

Even with just 24 hours in Merida, its central location in Yucatan, Mexico, even allows you to do a mini Merida day trip.

Located less than an hour from town, this Merida itinerary does include a visit to some Mayan Ruins and even one of the cenotes near Merida (a natural swimming pool).

With just one day in this walkable city, you can skip the rental car. Sticking to the main areas of Merida — Centro Historico (Historic Downtown) and Paseo de Montejo — you can walk or take Uber to get around.

Even for the mini-day trip just mentioned, it’s easier to Uber or take a taxi.

Ready to get into this 24 hours in Merida itinerary? Let’s get started with the first stop in Centro Historico, Merida’s Historic Downtown neighborhood.

Start your day in Merida getting to know the city on the Free Walking Tour of Merida. This tour is the best way to get to know this historic, colonial city in a short amount of time, as you’ll have a guide who’s a local to the area.

The Merida Tourism Office offers one-hour, daily walking tours, led by English-speaking guides. Tours start promptly at 9:30am, but you’ll want to show up by 9:15am.

Reservations aren’t required; just meet the guide on the first floor of the Palacio Municipal in Plaza Grande, seen above ⤴

Note: This is a free city walking tour, though it is customary to tip your guide to show appreciation. After the tour ends, consider tipping the guide $100-200 pesos ($5-10USD) per person.

After the tour, grab some lunch before heading out to the Mayan ruins near Merida. If you’re looking to try the best tacos in Merida, head to Wayan’e, but for a sit-down meal, opt for La Chaya Maya, two of the best restaurants in Merida.

After eating, call an Uber, grab a taxi, or jump in your rental car (if you got one), and start driving to the Dzibilchaltun Ruins. These are the closest ruins to Merida, located about 45 minutes from downtown.

Dzibilchaltun (pronounced zee-bee-shall-tune) is a smaller Yucatan Mayan Ruins site, but an interesting one that’s just outside Merida. This isn’t the case with all Mexico ruins, but you can climb some of the Dzibilchaltun pyramids.

After climbing the Dzibilchaltun pyramid and structures onsite, you can go for a refreshing swim in Xlacah Cenote. If you’re not familiar with cenotes, they are basically swimmable sinkholes or natural pools found throughout the Yucatan with cool, freshwater to swim in.

Cenote Xlacah is the closest cenote to Merida. It is a swimming pool style cenote, so it’s fully open with no covering, and popular with both locals and visitors alike. To practice sustainable tourism in Mexico, don’t put on any sunscreen or lotion when swimming in the cenotes.

Besides the ruins and cenote, there’s also the Mayan People’s Museum (AKA Dzibilchaltun Museum) onsite with a nice collection of Mayan artifacts. The display items inside were found when excavating the site and also at other ruins sites throughout the Yucatan Peninsula.

After about two hours exploring Dzibilchaltun Mayan Ruins and Cenote Xlacah, head back to Merida to shower and freshen up — that is, if you’re renting a Merida Airbnb/VRBO, Merida hotel or Merida hostel for the night.

Some of the most beautiful things to see in Merida are located along and around the Paseo de Montejo (Montejo Walkway, or Montejo Street). This walkable, tree-lined street has historic and grand European mansions, cute boutique shops, and great Merida restaurants and bars.

It is a two-mile-long street (3.2 km), and worth walking the whole thing from end to end. There are a few monuments along the Paseo de Montejo, but none as beautiful as the Monumento a la Patria (Monument to the Fatherland).

Made by sculptor Romulo Rozo, the Monumento a la Patria has more than 300 hand-carved figures depicting 700-plus years of Mexican and Mayan history. Unlike some monuments, you can go right up to it and see all the beautiful figures, including the carving of the Mayan rain god, Chaac.

The monument is located on the northern end of Paseo de Montejo, so from there, you can head south to Calle 47. This cute street is often called Restaurant Row because it has some of the best restaurants in Merida, and it makes the perfect dinner spot (see dining options above ⤴).

For some Merida shopping, Casa Tho and Happening Mérida are both great for clothing and jewelry. If you want some amazing Mexican art pieces and unique souvenirs, head to Posheria Merida for ethically-sourced pieces.

Best restaurants in Merida for Dinner

When it’s time for dinner, head to any of these great restaurants on Calle 47 (47th Street), only about one or two blocks off Paseo de Montejo:

All restaurants have both great food and drinks, but if you’d want a nightcap, head back to the bars on Paseo de Montejo. There, you have options including Casa Chica for cocktails, Hennessey’s Irish Pub for beer and La Bottega for wine (though you might want to Uber here).

Where to Stay in Merida

If your one day in Merida will also include staying for the night, you have great options at all price ranges. Below are three great Merida hotel options, and two of the best hostels in Merida.

Prefer a Merida Airbnb/VRBO? Head here for the 12 best home and apartment rentals.

Rosas y Xocolate Merida ($$$$): There are only four rooms at what’s considered the best Merida boutique hotel, but if you want to splurge for the night, there’s no better place than Rosas & Xocolate!

Located right on Paseo de Montejo, this is also the perfect place to enjoy breakfast or brunch in the morning before leaving town.

NH Collection Merida ($$): This hotel is located at hip Paseo 60, a shopping, dining and entertainment complex, meaning that everything you’d need is in the same building.

The NH Collection Hotel is on Paseo de Montejo, the best street in Merida, and it has great amenities including 24-hour room service, a rooftop pool and gym.

Nomadas Hostel ($): There aren’t many Merida hostels, but even if there were, Nomadas might still be the best one of the bunch!

Nomadas has that quintessential bohemian-colonial look Merida is known for, a gorgeous lounge area with swimming pool and hammocks, and a great location in Centro Historico (Historic Downtown). If they are full, try Casa Garza.

How long to stay in Merida: Is 1 Day enough?

While Merida is an amazing city to spend any amount of time in, also makes for a great one day trip.

The itinerary in this article is action-packed, but it will really give you a taste of both Merida, the city, and some of the amazing things to do in the Yucatan Peninsula, located just outside Merida.

With Merida International Airport (code: MID) about 20 minutes from downtown, it’s easy to travel in and out of Merida. If you’re planning to visit other places to see in Yucatan, you have many options located within a few hours of Merida, Mexico.

The top Mexico vacation destinations of Tulum, Cancun and Playa del Carmen are about three hours away by rental car or bus.

For a more relaxed vibe, head to the colorful colonial cities of Valladolid or Campeche City, both located about two hours from Merida.

🚑 Should I buy Mexico travel insurance?

💧Can you drink the water in Merida?

No — You’ll want to buy a Water-To-Go Bottle, which filters your drinking water so you don’t get sick from drinking water in Mexico, and helps keep you hydrated while traveling Mexico. (Read more)

Yes — Renting a car in Mexico is one of the best ways to see the country! I always rent with Discover Cars, which checks both international companies and local Mexican companies, so you get the best rates. (Read more)

📲 Will my phone work in Merida?

Maybe — It depends on your company, so check with your provider. If you don’t have free Mexico service, buy a Telcel SIM Card. As Mexico’s largest carrier, Telcel has the best coverage of any Mexico SIM Cards. (Read more)

🏩 What’s the best way to book my Merida accommodation?

For Mexico hotels and hostels, Booking is the best site. If you’re considering a Mexico Airbnb, don’t forget to also check VRBO, which is often cheaper than Airbnb! (Read more)

🎫 Do I need a visa for Mexico?

Likely Not — U.S., Canadian and most European Passport holders don’t need a visa for Mexico; but check here to see if you do need a Mexico travel visa. The majority of travelers will receive a 180-Day FMM Tourist Visa upon arrival.

Hi, I'm Shelley — a former Miami travel magazine editor who ditched the office for the world! I've been an expat in Mexico since 2018, and help travelers like you cross Mexico off your bucket list. [Read more]