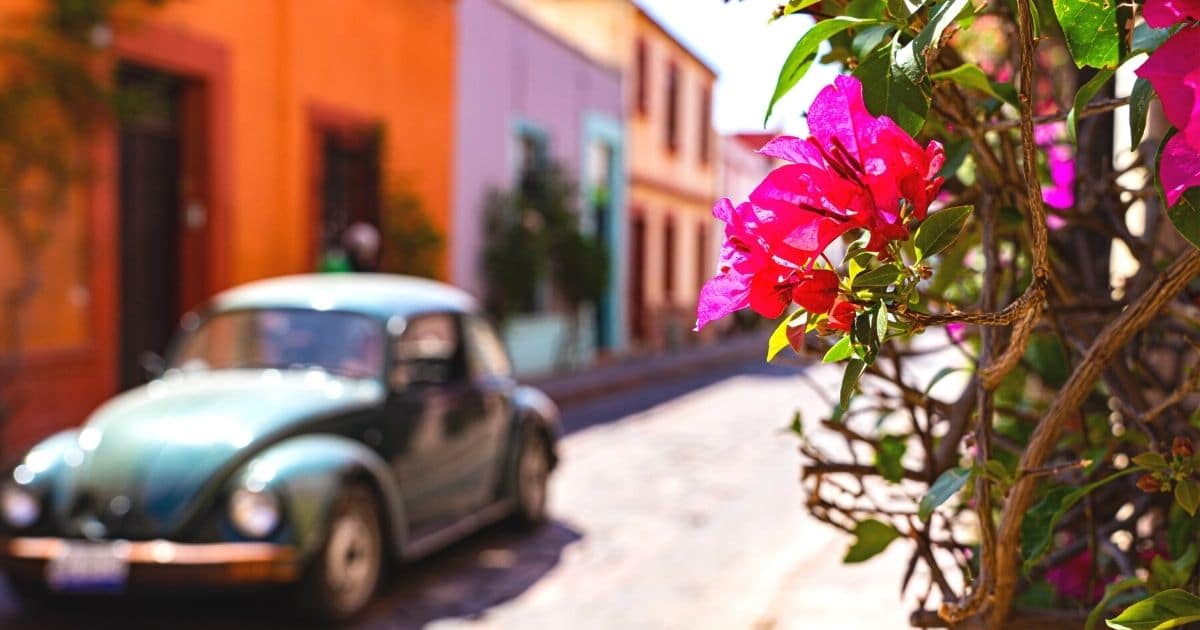 Disclosure: Articles contain affiliate links, meaning when you make a purchase, I earn a commission. These links cost you nothing to use, and help keep my content free! It’s a win-win for us both — as I only recommend products and services I trust. For more details see the Disclosure Policy and Privacy Policy.

Looking for the best way to spend 48 hours in Merida, Mexico?

You’ve landed on the right blog — because I just so happen to live in Merida! In this article, I’ll highlight the best things to do in Merida, so you enjoy every second of your 2 days in Merida, Yucatan, Mexico.

Called the Cultural Capital of the Yucatan Peninsula, most travelers will want to experience just that — authentic Mexican and Mayan culture. Merida being a smaller-sized city is great, but there are also a lot of amazing day trips from Merida, so we’ll also narrow those down.

Within Merida itself, you don’t need a car because it’s walkable and there’s Uber and taxis. However, for a day trip outside of the city, a rental car is your best option with only 2 days in Merida. If you don’t want to drive, Mexico has a great bus system on the ADO bus.

Since both Merida and its surrounding areas in the Yucatan Peninsula are equally amazing, that’s exactly what this itinerary will cover. Keep reading to discover the best way to spend one day in Merida and the other on a Merida day trip to one of the Seven Wonders of the World!

On the first of your 2 days in Merida, you’ll want to check out the Historic City Center and Paseo Montejo, the prettiest street in Merida. Make sure your camera/phone is fully charged, as Merida is one of the most beautiful cities in Mexico with its colorful colonial architecture and sites.

Start the day with a visit to the Paseo Montejo, a tree-lined street with some of the best cafes, shops, museums and monuments in Merida. The entire street is two-miles-long, and you can head to the Monumento a la Patria, a beautiful monument on the northern end of the street.

This monument is unlike so many others since you can go right up to it and check out the intricate details. Hand-carved by Colombian sculptor Romulo Rozo, there are more than 300 figures depicting Mayan and Mexican history, including a carving of the Mayan rain god, Chaac.

From here, take a leisurely stroll down Paseo Montejo, walking by the historic mansions which are now both museums — Palacio Canton Museum and Casa 495 Museum. For breakfast or brunch in Merida, check out Rosas & Xocolate, Casa Chica and Marago Cafe, all located on Paseo Montejo.

For Merida shopping, head to the gorgeous Casa Tho Concept House. This is a renovated mansion surrounding a beautiful courtyard with 10 or so boutique shops selling clothing and jewelry and more by local designers. For unique Mexican art souvenirs, Posheria Merida is the place.

Start out by visiting Plaza Grande (Main Plaza), the largest park in downtown. The centerpiece of Centro Historico, here you can marvel at the 16th Century Merida Cathedral, take a photo at the large Merida letters sign, visit Casa Montejo Museum, Palacio de Gobierno and more!

Next, check out Parque Santa Lucia to see the “Kissing Chairs,” which are 8-foot-tall, adjoining white chairs. You’ll see these same chairs throughout the Yucatan — though none this large. Just a few streets away, Parque Hidalgo is great for people-watching and relaxing in the shade.

If you want to do some Downtown Merida, head to Casa de las Artesanias (Artisan House). This fair-trade shop is run by the Yucatan government and features crafts made by local artists from small pueblos near Merida. It is the best place to buy authentic souvenirs in Merida.

For traditional Yucatacan cuisine, you have two great options in Centro Historico — La Chaya Maya and Museo de la Gastronomía Yucateca (MUGY). You can’t go wrong with either, as they are known as some of the best restaurants in Merida.

At either, you can try all the most popular Yucatan foods. These include cochinita pibil (slow-cooked suckling pig), sopa de lima (lime and chicken soup), papadzules (egg enchiladas in pepita sauce), poc chuc (grilled pork) and panuchos (tortillas stuffed with black bean paste).

For a nightcap or after dinner drink, head to any of the best bars in Merida, all of which are located right in downtown. Among them, La Negrita Cantina, Rosa Sur 32, Pipiripau, La Fundación Mezcaleria, Malahat and Mayan Pub, frequented by locals and visitors alike.

PLAN TO PARTY? 🍾 Don’t forget your Anti-Hangover Meds, so you enjoy Day 2 as much as Day 1!

One of the Seven Wonders of the World, seeing the Chichen Itza Ruins is a Mexico bucket list item for many. Located less than two hours from Merida, this UNESCO World Heritage Site is considered among the best Mayan ruins in Yucatan, Mexico.

You can take the ADO bus to Chichen Itza; though a rental car is of course quicker and much more convenient. There are also some tours from Merida to Chichen Itza tour options listed below — though to see the next place on this itinerary, Cenote Ik-Kil, you’ll have to go on your own.

Merida Car Rental: Everything You Need to Know + 10 Driving Tips

However you plan to get to Chichen Itza, you’ll want to stay at this historic site for about 2-4 hours. Wear your most comfy shoes, as it’s a big place with about 10 buildings, Mayan Ruins complexes, the Sacred Cenote and even more things to see at Chichen Itza.

If you’d like to hire a Chichen Itza tour guide, you can do so right at the entrance for about $1,000 pesos ($50USD). As there’s so much historical significance here, do consider a guide to explain it all and enhance your overall understanding of the Mayan people.

After a couple of hours at Chichen Itza, what better way to cool down than with a swim in one of the refreshing Yucatan cenotes — Cenote Ik Kil, located just minutes from Chichen Itza. Never heard of a cenote (pronounced sen-no-tay)? There’s an explanation below for you ⤵

What is a cenote? Underwater sinkholes containing clear, freshwater, that are found in only a few places on Earth. The largest concentration of about 6,000 cenotes is in Yucatan, Mexico.

Considered one of the most beautiful cenotes in Mexico, Ik Kil Cenote stands out among the thousands. Given its proximity to Chichen Itza, many combine the two on a Merida day trip. As the water is about 75°F year-round, it’s so nice to end the day here after visiting Chichen Itza.

After freshening up, it’s time for a farewell dinner. If you want to splurge, there’s Ku’uk, an upscale, fine dining restaurant in Merida, serving elevated Yucatan cuisine. For dinner with a view, head to Picheta, which overlooks the Merida Cathedral from their rooftop patio.

For somewhere more fun and casual, El Catrin gastropub is a great option. It’s located a few blocks off Paseo Montejo on Calle 47 (47th Street). This street is often called Restaurant Row, so you’ll find other options there as well, like Oliva Enoteca, 130° Steakhouse and Micaela Mar y Leña.

Where to Stay in Merida: Hotels, Hostels & Airbnbs

You have many options for Merida accommodations. There are great Merida VRBO/Airbnb home and apartment rentals you can check out here, 12 Stunning Airbnbs in Merida Mexico [Picked by a Local]. For Merida hostels, you can’t go wrong with Nomadas and Casa Garza.

If you’re more of a hotel traveler, here are some of the best hotels in Merida, with options in every price range.

The best time to visit Merida is from about November to March. With Merida’s tropical location, the weather is warm to hot (and humid!) nearly all year long — though winters are cooler at about 68-75°F day and night. By contrast, summer temperatures hover around 85-100°F.

The most fun time in the city is Hanal Pixan, the Mayan celebration of Day of the Dead in Merida. It takes place Oct. 31-Nov. 2, with altars set up around town and the annual Paseo de las Animas (Parade of Souls). December is also nice, as the city’s decorated with festive lights.

Check out the Merida temperature yearly averages below, and for a detailed explanation, check out Merida Weather: A Month By Month Guide to Merida, Mexico Weather.

How to get from Merida Airport to the City Center

Merida International Airport (code: MID) is located 20-30 minutes from downtown. From there, you can rent a car, take a taxi or Uber, or use a private transportation service (see options below ⤵).

Merida Car Rental: Everything You Need to Know + 10 Driving Tips

A Few Things to Note: Sadly, taxis often price-gouge tourists at the airport. With Uber, you may have to walk a few minutes out to the main road, as they won’t always do curbside airport pickup. If you’re someone who likes to have things planned, opt for the transfer service.

Merida, Mexico, is a very special city — and I’m not just saying that because I live in it! From gorgeous colorful colonial architecture, to amazing Yucatan food, Mayan culture, boutique shopping, and amazing day trips from Merida, it’s hard not to fall for Merida’s charm.

Is Merida worth visiting?

Long answer: As the Cultural Capital of the Yucatan, those who love Mayan history and Mexican culture will enjoy Merida. It provides a wonderful alternative to the big-name Yucatan Peninsula travel destinations like Cancun and Tulum, both located about 3.5 hours away.

It is still an up-and-coming Mexico travel destination, though appearing more peoples’ radars thanks to press like this 2020 Conde Nast Traveller poll naming Merida the #3 “Best City in the World” 😳 However, for now, Merida remains approachable and appeals to a variety of travelers.

So what are you waiting for? Book your Merida flight below ⤵

Have questions about this 2 Days in Merida Itinerary?

Join the conversation in the comments down below, and I will do my best to get you the information you need!

Cancun to Merida: 6 Best Transportation Options in 2021
10 Best Merida to Chichen Itza Tours in 2021
One Day In Merida Mexico: The Ultimate 24 Hour Itinerary
Merida Car Rental: Everything You Need to Know + 10 Driving Tips

This site uses Akismet to reduce spam. Learn how your comment data is processed.

Hi, I’m Shelley — a former Miami travel magazine editor who ditched the office for the world! I spent a year traveling Mexico solo, before settling down in Merida in 2019.

I started this website to help travelers like you plan the most epic Merida trip. Visitors seeking amazing Mexican food, beautiful Yucatan nature and rich Mayan cultural experiences will fall in love with Merida, Mexico — just like I did!